Installed a 'hugger' on my F800R last weekend.
BMW and other companies sell these but they're not cheap, all are over 100 euro.
Just for a piece of plastic.. that's expensive.

On a german forum I found a post that the hugger from a KTM Duke also works. And that one only costs 15 euro.

So I tried this part, here are the installation instructions: 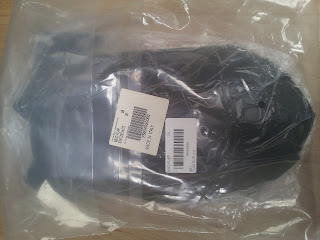 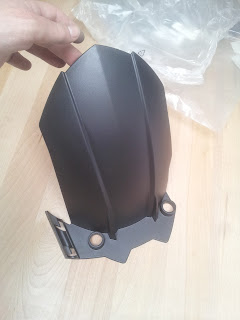 This is how it looks. The base is too big to mount on an R. We need to cut of a part. 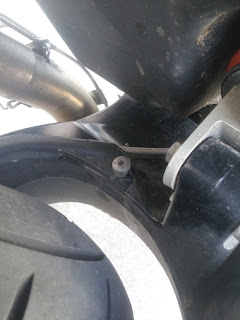 here is where it has to go. Remove the torx screw. Take a piece of paper and trace the outline. To the right the shock absorber is mounted, on the left there's less room because of the tubes.

I read many people used a dremel and were busy for an hour.. I took a bigger saw and was done in 10 minutes :) I did cut one part at the time and fit each time to be sure 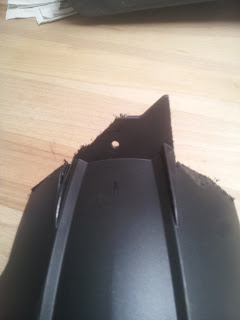 This is how it looks ready to be mounted.

I first cut off the part to the right. Just next to the triangular part as this gives the hugger its support. Then you can fit it next to the shock absorber.

Then I measured where the hole had to go (again using a piece of paper). This made it easier to fit each time, I used the screw to put it in and noticed where it would touch the tube on the left side..

First cut it wide, fit, and cut some smaller pieces until the flat part fit. You want to keep as much of the flat part as possible. On the left a little bit at the bottom of the triangular part is cut, or it wouldn't fit.

When I mounted it I noticed it's not really really sturdy anymore. Because so much from the base has been cut on the sides it became a bit more flexible. If I would do this again I would try to leave more on the far left and right side (maybe half a cm along the whole edge). It will then sit closer towards the tire but is probably less flexible as the base continues from the left to the right. Now only in the center part there's a base left.. 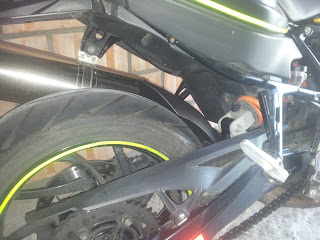 Anyway here is it mounted. I've driven over some bumpy roads and it did touch the tire a few times, but only a very little bit and in exceptional conditions. In normal use it'll stay in position.

Email ThisBlogThis!Share to TwitterShare to FacebookShare to Pinterest
Labels: bmw