It's been a long time since I blogged as I posted some updates on the flippers.be facebook page..

I'm still working on some projects that are better suited for blogging so I'll try to make some updates here again. Don't know if many people still follow this blog or accidentally read this.. guess I'll see if I don't get any reactions ? :)

Anyway here's my latest project : a DrDude playfield !
I got this in a warehouse buy and as it was complete I hate to part it out and sell it. I want to play it !
I have a Black Knight 2000 which uses a similar boardset.. so it's a good way to get additional games in a full gameroom.

The boardsets are similar (sys11B and Sys11C) but not identical. But in theory it should work.

Even the soundboard should work but needs different jumpers when the DrDude eproms are installed. I will check this out later, first want to get the playfield working. Right now the machine plays with BK2K music. 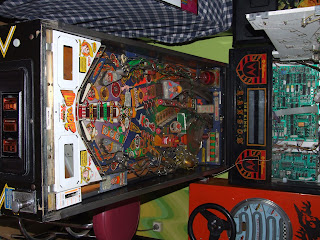 Installing the playfield however wasn't as easy as I initially thought it would be. On WPC games and older games the playfield connects directly to the driver/power board. But on Sys11 you have an interconnect board that's wired specifically for that game.

The BK2K manual als doesn't include a wiring diagram, so it's not as easy as comparing both manuals next to each other and seeing where they match or differ. I've already spent too many hours tracing wires on both playfields and in the cabinet and in the DrDude manual..

The good thing was that nothing blew up when I connected the playfield and powered the machine up. I really was afraid the first time that a fuse would blow because coils were connected different, or some coils started to burn. Well actually they did a little bit - read further .. :)

Luckily there is a bit of a consistency between the re-use of connectors and even wire colors in the Sys11 games.
Some things did not work at all, like the slingshots, motor, magnet and big guy coil.
Except for the coils, switches and lamps seem to be configured identical. That's great  news !

The biggest issue was that the playfield has a 3-pin connector that had no suitable match in my BK2K backbox wiring. There was a purple-yellow wire that provides power to a lot of coils that wasn't connected. I made up a plug for it, and checked on the black knigh playfield where that connected to. 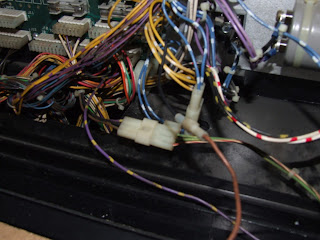 Turns out it was pin J12-13 on the interconnect board. I installed the wire there and suddenly the slingshots worked ! Yay ! 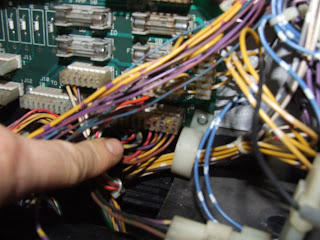 Unfortunately now was where the differences in wiring showed up.
When the A/C Relay in the coil test is activated, the big guy flasher lites. And the Big Guy coil is activated all the time and started to smell.. so I temporarily disconnected it. Still need to find out what coil the machine thinks that is, maybe the a/c relay..

The motor of the mixmaster also didn't work. That was a big problem as it is very important for gameplay (I can live with a big guy that doesn't move - but without a working mixmaster the game is no fun at all). I tested the motor by connecting a 9v battery and it started to turn so the motor itself was good. That was good news ! I really didn't want to invest in a new motor - should that have been broken then the playfield would get parted out after all.
Investigated this further and the capacitor on the motor driver board underneath the playfield was bad. Put a new cap in and now the motor works !

What's left is the magnet. This also doesn't work, seems it's wiring is also integrated in that one plug that didn't exist. Still need to compare the wiring between BK2K and DrDude to see where its source is. But the game is playable without the magnet activating. So I'm already happy with this situation.

Next steps - shopping the playfield and getting the sound and speech working.