Grand Champion on Theatre of Magic

Visited someone yesterday evening to pick up some parts.. played a few games on his pinball machines, talked a bit, ..  I haven't played Theatre in a long time and I don't consider myself to be a very good player (just average), so I was amazed myself by how well I played.
I like Theatre of Magic a lot - I love all John Popaduik games. This machine was playing very well, you could loop the centre ramp over and over, the flow in this game was unbelieveable. And that's the type of game I like - no stress, no worrying about the rules and what shot to make next - just letting the pinball roll around the playfield over and over, letting the shots come naturally. In the end I noticed I got quite far, the clock was at 10.. so then I only started to concentrate on adding a few hours.

I think it was only the third time ever that I've reached the wizard mode on Theatre (Grand Finale), and even got it whilst Tiger Multiball was running (have no idea of the game was a bit confused because of this).
Anyway, final score on 5 balls (and got 2 extra which I lost very soon) was over 3.5 bill.. 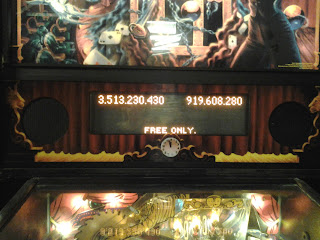 New article, at the rock around the jukebox show Henk de Jager presented his latest game, an electro-mechanical bingo machine !

AC/DC as the new Stern

Many rumors going around that AC/DC would be Sterns next title by Steve Ritchie ?
(after it was first rumored to be, then declined, ..)

In a new video from Stern about the making of transformers, Steve's pc screen is shown with a detailed autocad playfield drawing on it. A new layout, not of Transformers or any other released Stern pinball machine, so probably the next one he's working on..

On RGP and other forum people think the horns are about AC/DC.

Here's a screenshot , up to you to decide what theme it'll be..
By Aeneas at 9:10 AM No comments:

Why do switches always break at the worst possible time ?
Was playing Medieval Madness yesterday, had a very good game, 4 blue lights were already on..
and then suddenly the microswitch inside the castle didn't register anymore :-(
The gate was open but a ball shot trough it didn't register anymore. It's the same switch that registers a pinball that's being locked, so I also couldn't start multiball anymore (and only needed 1 shot).
No use continuing my game as I couldn't get any big points anymore..

Turned the machine off, removed the glass, lifted the playfield.. one wire had broken off.
1 minute of work to solder it back was all it took to make this pinball machine play well again.