Went back to repair the Dirty Harry from hell..
it's a game on location where a lot of kids come, the machine isn't in the best condition, and many kids flipping the flippers all the time... well, kids can break anything. really, anything.

If you don't believe me, take a look at this.. on two popbumpers the whole assembly was broken. On both rings, both screws/nuts had just broken off from the popbumper ring, and the metal and bakelite piece had also broken, parts were in the cabinet.. First problem was a wire broken off from the upkicker coil that brings the pinballs onto the ramp of the gun. All 4 pinballs were stuck in there..

Next problem was a melted flipper coil, replaced it with another, the flippers work fine. Adjusted the eos switches so they close halfway the stroke, but probably the kids will melt this new coil too.. just put kids for a few hours behind a pinball machine and let them flip all the time so the coils don't get time to cool off..

Next problem, a weak upkicker in the back. Disassembled the part and noticed why - part of the plunger that kicks the ball up the ramp had broken off. In the photo you see how little was left when with the plunger was raised, only about half a centimeter that extends the coil and tries to kick the ball in the air. Normally this part is 1,5 to 2 centimeter, so the pinball gets a good kick in the air. 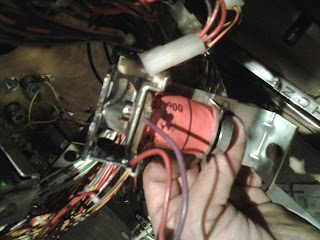 I didn't have a replacement upkicker plunger with me, so this was a bit of a problem.
Tested it, but the pinball really didn't have enough power to get onto the ramp. This was a problem as pinballs get stuck there, or the coil can overheat or a fuse blow because the pinball machine continues to fire the coil over and over again in an attempt to kick out the pinball.

So, being creative was the only solution.. had to get this game playable, at least for a few days, until I could come back with the correct plunger.
Real operators would use wood screws but I don't want to damage a playfield :)
So wire straps were the best thing to use.. I just blocked the entrance so the ball couldn't get stuck. 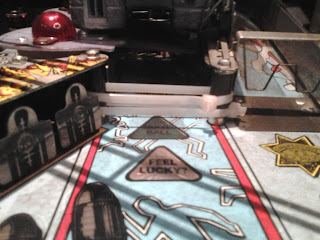 Played a few games and it seems fine.
I do wonder how long it'll last.. not sure how strong these are because the flippers do kick the pinball quite powerful into them.
They're quite fun actually as the pinball is returned VERY fast, sort of a kicker on the latest Stern machines (like Iron Man) that also catapult the pinball back to the flippers, only this is my lowcost version ;-)

And this is not the only feature that's blocked on this game btw.. 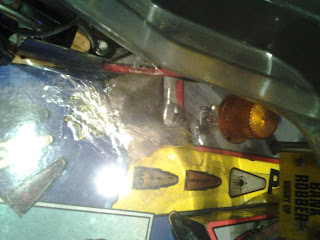 Another scoop had been blocked with clear packing tape, as pinballs got stuck there in the past.
Not the best solution, but hey, if it works for them, it works for me. At least that's one place where the pinballs won't get stuck anymore, so kids can continue playing pinball..