Some important news was made public on Spookys latest podcast : Spooky teams up with Ben Heck and CGC to make a new pinball machine.

Ben Heck has worked together with Spooky in the past and had plans to design a new game, but due to the success of TNA (and then the run of Alice Cooper and now the insta-sell out of Rick and Morty), Bens game just didn't fit into Spookys production planning.
So having Ben design his game in cooperation with Spooky, but outsourcing assembly to CGC (who already have a lot of experience assembling pinball machines) solves this problem.

There's some speculation about what the new theme will be. Not Godzilla, as that license was taken by Stern. I wonder if someone at Stern now regrets the decision of not letting Spooky get that license. It looks like the license they did get (Rick and Morty) is much more successful, and now Ben getting his new game (and helping CGC get more business), must somewhat cost Stern in sales.

Another company who won't be happy with this announcement must be Deeproot. Ben had worked together with John Popaduik in the past - the title they've shown in preview RAZA (Retro Atomic Zombie Adventureland) started out as 'Ben Hecks Zombie Adventureland', almost 10 years ago when Ben worked together with John.. A whole era later, and John and what's left of that design is now at Deeproot pinball and they'll have a big release event planned within less than 30 days.

It's probably no coincidence Ben now starts to tease his new design.. as this will take a bit of thunder away of DR. People have limited pinball funds, and need to make decisions.. but something available now or wait and hold that money for something that's being teased and might be a lot better.. do you buy DR's RAZA zombie game that was hot 8 years ago but the interest in zombie games is over (and Stern made the excellent The Walking Dead game to fill up the gap when no other zombie pinball machine existed), based on a design Ben was involved but which was reworked and watered down (I remember something about Ben having plans for a rotating mini playfield) ?  or do you wait for the newest, hottest brand new design by Ben which may be a lot better and do have exciting new mechanisms ?  I'm sure some people will wait and see what Ben and CGC releases before they make a decision on what to buy..

New article about how to set up a new spooky pinball machine.

I have some old articles in the pinball 101 section about opening a game, removing the glass, and so on.. this is a new article about setting up a new in box Spooky pinball machine.
It's especially for all those that are new to pinball and fortunate enough to buy a brand new game as their first machine.

I finally found time and motivation to start working on the website again.

The last layout change was about 10 years ago. It was optimised for large computer screens, and the whole world has gone mobile since then..

Now I'm glad to say that the site has become more mobile friendly and will adapt on small screens.
Some changes may still be necessary in the coming weeks.

This means I plan to publish new articles again, I haven't posted anything in almost 3 years.. I have a lot of pictures and ideas ready.

I have decided not to update the dutch part of my website anymore. In the past I translated each article, but that's too much effort. I keep the dutch pages online but will not add anything new.

On the main page there's now also a widget showing my latest blog posts. That way this blog is a bit more integrated with my main site.
I will try to blog more regular. Expect Things tthat are not worthy of a fixed article, but more my opinion, what's going on in the pinball world, ..

I used to burn eproms using my TOP2008 programmer that I had bought years ago on aliexpress.
The only problem with this version is that the software only worked on windows XP..

Not really an issue as on my old laptop I had windows7 and that had an option to run XP too.
But then it upgraded automatically to windows10 and XP was removed as virtual machine..
That was a few years ago but I didn't need my programmer.

Now I want to use it again.. but I can't get it running. I now have a new laptop (windows10 also).
I tried installing XP in a virtual machine but it doesn't recognise the USB - vm says the device is busy/invalid and can't connect it to the virtual machine..

The programmer is really good it handles even older eprom types and has functionality to test/ verify certain ics..
I really want to start using it again..

Edit: found a version and install instructions for topwin8 but it seems that only works for recent programmers and not for the top2008..
Edit2: got it working on 32 bit Vista. Will write an article with more information about it later. 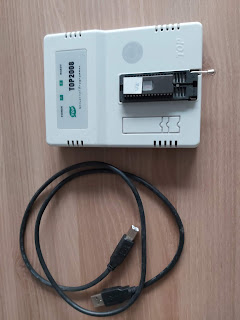